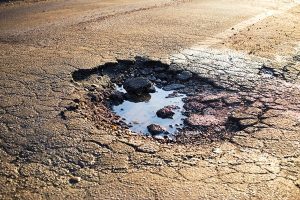 Poor management and maintenance of SA roads has resulted in damages claims that are eroding municipal budgets.

Picture Supplied. A road damaged by rain and snow, that is in need of maintenance. Broken asphalt pavement resulting in a pothole, dangerous to vehicles.

The Limpopo department of public works and its entity, Roads Agency Limpopo (RAL), is facing a whopping R118 million worth of claims and a total of R40.2 million from pending claims for damages caused by potholes.

The Citizen also approached the City of Johannesburg and Cape Town, both run by the Democratic Alliance (DA). They refused to reveal the extent of damages they were facing from pothole-related claims.

Joburg spokesperson Nthatisi Modingoane said Saturday Citizen should request the information by using the Promotion of Access to Information Act.

Organisation Undoing Tax Abuse (Outa) chief executive Wayne Duvenage said it was illegal to withhold the information from the public.

“They are not allowed to withhold that information because it’s in the public’s interest to know, but this is the situation we find ourselves in, in this country,” said Duvenage.

The fact that there were so many road damage claims for potholes was testament to the state of roads in SA.

In 2017, the Johannesburg Roads Agency (JRA) said R1.38 billion per year would have to be spent for the next decade to repair roads after mayor Herman Mashaba announced an R88 million budget to repair potholes.

DA spokesperson on public works, roads and infrastructure, Katlego Phala, said the department was concerned about the impact the pending claims would have on its finances.

She said the claims had not been budgeted for and RAL was already over-committed to the tune of R798 million.

“Last year the auditor-general stated that the RAL had a deficit of R917 million and had creditors that exceeded cash at year-end. To further compound matters, the road maintenance grant from the national department of transport has in previous years been used for new roads instead of its allocated purpose,” she said.

Phala, a member of the portfolio committee on public works, roads and infrastructure, said the high amount of pothole claims pointed to weak internal controls and poor management and maintenance.

According to the Johannesburg Roads Agency, in order to claim for damages, a motorist needs a police affidavit, a copy of the driver’s license of the claimant in the case of vehicle damage, a copy of an identification document, three photos showing damage to vehicle, three quotations or an invoice or proof of payment.
You also need a letter from your insurance company that confirms that the claim was not logged to your own insurance, or an affidavit of non-insurance.
You would also need a doctor’s report if there is personal injury involved.
Read original story on citizen.co.za