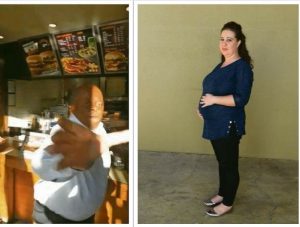 A leading businessman apparently assaulted  a woman who was pregnant at Steers in Ruimsig on the West Rand.  He smacked  her  against the breast, slapped her through the face and on the stomach and through her over the restaurant’s chairs.

The incident happened at a parking lot situated in the Featherbrooke Village shopping center last Wednesday.

The confrontation between Romeo Makhubela, chief executive of the Novare financial service group and 29-year-old Bianca Fourie, was captured by the restaurant’s security cameras. Fourie only realized days later who is Makhubela. He previously served as CEO of Vunani Fund Managers.

Makhubela and Fourie  both filed criminal cases – Makhubela for crimen injuria and Fourie for assault. Makhubela also made a case against her  at the  Equality Court for the use of racist language.

Fourie says she was attacked without reason, and Makhubela said she had insulted him before his children and pursued him. It made him feel threatened, he said through his lawyer.

He hit me on my stomach.

Fourie said there was a row in the parking lot between the occupants of three cars over a single parking lot.

An insider of a big BMW shouted at her and then climbed out and walked  towards Steers. She followed him since she too was on way to Steers, she said.

“People respond like Makhubela on the road every day, so it actually did not bother me. I really did not say anything to him, “she said.

However, Makhubela looked over  his shoulder brusquely as if he thought she was pursuing him, claiming Fourie. He also made  foul remarks.

On the video that captured the footage from the restaurant’s security cameras, Makhubela can be seen in front of Fourie’s at the restaurant.

Fourie said she shouted at him, “Are you crazy? I’m pregnant. ”

On the video it is clear that Makhubela assaulted her  and she stumbles backwards, out of the picture. Fourie said she had fallen over the Steers chairs on the sidewalk. “He hit me on my stomach too.”

When she wanted to go to the shop again, he still pursued to attack  her.

“I decided I was not going to leave it,” she said. “I wanted to take a picture with my phone, but then I accidentally took a video. I said to him, “Come see me.” At least I can identify him. He hit me again after I filmed him. ”

Titswa Modise, Makhubela’s attorney, confirmed that Makhubela was involved in the quarrel, but that it was Fourie who had pursued Makhubela and felt threatened.

Steers marketing advisor Adolf Fourie says although the dispute did not t happen inside their shop, they are giving there support to Fourie.

The SAPS confirms that Fourie has made a case of assault against Makhubela. Makhubela, in turn, made a case of crimen injuria and challenged Fourie before the Equality Court. He claims that he used his racist language against him.