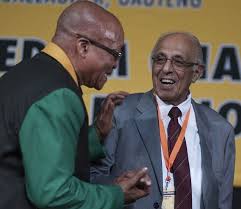 It is difficult to understand why such malicious blockade would be set against the number one citizen of a Country. In a statement released a short while ago the president has reiterated that Deputy President Cyril Ramaphosa will lead the government delegation to the services.

President Jacob Zuma says he will not be attending Ahmed Kathrada’s memorial service and funeral this morning in compliance with the wishes of the stalwart’s family.

Following reports that the president was not welcome at the funeral, the Ahmed Kathrada Foundation moved to clarify that everyone was welcome.

Kathrada, who died yesterday at the age of 87, will receive an official special funeral

The funeral is expected to be an inter-faith service but the late struggle stalwart will be buried according to Muslim rites.