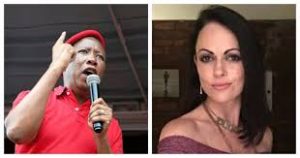 It detailed how R1.8 million made its way to Julius Malema and EFF deputy Floyd Shivambu.

Needless to say, it didn’t go down all that well. On 24 November, Van Wyk shared an editorial piece published by M&G, highlighting the “dangerous game” Malema is playing.

According to the editorial, more than 800 journalists were killed since 1992, and it pointed out that “many of the journalists on Malema’s list have already been subjected to a torrent of abuse on social media platforms.”

While most of the online attacks are just “noisy proclamation,” others “show a more sinister intent.” It went on to say that Melama should be taking responsibility for this because he is “stoking the flames of a campaign against journalists whose work he disputes.” In the caption of her tweet, Van Wyk wrote:

“[Julius Malema] has to take responsibility for violence meted out to journalists. He is stoking the flames of a campaign against journalists whose work he disputes… and ultimately endanger the lives of journalists.”

Personal attacks online
The tweet soon made it to Malema’s radar, and he simply responded: “You are sick, go to hell satan.” When netizens pointed out that he was immature in his response, Malema responded with “You think I care?”

A Twitter user known only as Micky said that it was no way to talk to a woman. Malema responded: “I just did, so what?”

Since publishing the Scorpio report last week, Van Wyk has urged Malema to prove her wrong or even sue her, but instead, he’s reverted to name-calling on social media.

The threats must be addressed
As reported by Charles Cilliers of The Citizen, the South African National Editors’ Forum (sanef) said on 24 November that Malema’s and others threats to woman journalists have to be addressed and that the SANEF seeks a meeting in this regard with the EFF leadership.

“Following [Malema’s] comments, we have seen some of the journalists physically accosted and abused on social media. One journalist was verbally threatened outside the venue of the Zondo commission, where Malema had made some of these threats. In another incident, a senior editor [Ranjeni Munusamy] was accosted by three men who shouted her surname and mocked her while she was out shopping.”

Sanef went on to say that real danger here is when online threats “filter beyond cyberspace and become physical threats.” They added:

“Criticism is part of democracy but hate speech and sexually abusive threats online, and bullying are out of order and can endanger the lives of journalists. They also have a chilling effect in newsrooms, with specifically younger journalists feeling fearful and intimidated and thus withdrawing from critical reporting on politicians.”