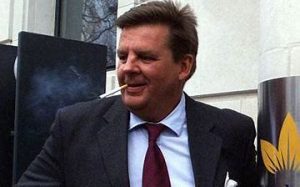 The list updates daily according to changes in the net worth of billionaires. While Oppenheimer was the word’s 216th richest person, and Rupert the 240th, the new tally puts Rupert at 241 and Oppenheimer at 245.

Rupert-controlled public companies valued more than R600 billion ($40 billion-plus) – including luxury goods holding company Richemont and diversified holding company Remgro – have been built over decades, and have made a wide range of stakeholders very wealthy over the years. These include government employees and the fiscus.

The billionaire’s detractors – particular the leadership of the EFF and BLF, as well as certain factions of the ANC – have often accused him of leading so-called white monopoly capital in South Africa, and for being part of the so-called Stellenbosch mafia.

However, EFF deputy president Floyd Shivambu has also been accused of being “close” to Rupert, following journalist Pieter du Toit’s book The Stellenbosch Mafia alleging that the pair worked together on a personal project of Shivambu’s – a hospital in the Giyani area of Limpopo.

In the book, Rupert is quoted as saying: “We had lunch together at Tokara, Ferreira’s wine estate… Jannie then took them to Fleur de Cap, the farm my father bought that is now owned by Remgro. I was concerned that they might think that all white people live like that because they already believe we bathe in champagne.”

Shivambu has however denied ever having a relationship with Rupert saying: “[I] never had any relationship with him” and asked City Press: “How can I feed information on the ANC conference when I am not a member of the ANC and was not attending their conference?”

Rupert also told Du Toit the Power FM he gave in December 2018 was on the advice of Shivambu.

“Believe it if you will,” Rupert is alleged to have told Du Toit, “But Floyd Shivambu advised me to do the PowerFM interview. Once he got to know me, when he realised what I was doing, that I was opposed to apartheid and who I knew (during the struggle) he said: ‘But nobody knows this. You’ve got to go on Given Mkhari’s show and do the chairman’s conversation.’”