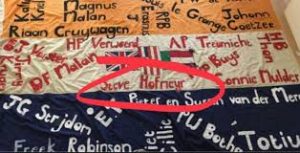 It is noteworthy that Johan Pienaar’s (offensive) action at the Woordfees in Stellenbosch to throw the old country flag (the Orange Blanje Blou) on the sidewalk so that the public can trample it, coincided with the Mandela Foundation’s application at the Equality Court that the display of this flag is declared hate speech.

Pienaar alleges in his statement that the “Orange Blanje Blou” flag is a symbol of a government whom committed a crime against humanity.

This is untruthful. This flag is a symbol of order, civilization, progression, freedom, respect for cultural differences and a Christian order. Under this flag, after becoming a Republic, South Africa experienced an absolute peace: “An example of brilliant peace on a troubled continent,” as the Rand Daily Mail wrote on July 30, 1966. There was a growing unity amongst national leaders. The country has experienced an unprecedented period of boom in the economic sphere.

Under the “Orange Blanje Blou” the fight against communism was fought and under is fluttering our soldiers fame was obtained. In his actions, Pienaar plays into the hands of Marxism and destroys nationalism and promotes liberalism and communism.

Pienaar argues that this flag represents apartheid. Then he engraves the names on the flag in particular of those people who broke apartheid, men such as John Vorster (who started destroying Dr Verwoerd’s apartheid policy), PW Botha, Connie Mulder, Jimmy Kruger and several news commentators that are still present.

If Pienaar does not want to be an Afrikaner, we will acknowledge that, but leave the Afrikaner and the symbols that are precious to us. By treading on the “Orange Blanje Blou” in Stellenbosch, he tramples the Afrikaner as a nation. Whether he does it out of ignorance or deliberately, only he will know.

We, the Afrikaners, agree with what Dr. DF Malan said on May 25, 1926, with the acceptance of the “Orange Blanje Blou” as a national flag for South Africa:

“A flag is a sign of popular existence. A flag can create the greatest enthusiasm … can stir tears … can bring the deepest drivers into action, and can inspire the noblest efforts. For a flag people will live, and will fight and die.

By: Andries Breytenbach / Leader of the HNP