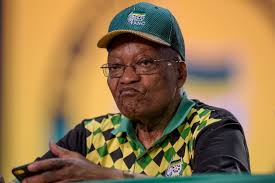 At 6.57pm on December 18 2017 at the Nasrec convention hall in Johannesburg, Jacob Gedleyihlekisa Zuma ceased to be president of the ANC.

The announcement that ANC deputy president Cyril Ramaphosa had won the election to succeed him put an end to his mind-numbingly disjointed ANC speeches, pockmarked with dissonance and a hip-swerving evasion of straight talk; an end to any vision and an honest introspection of his role in the disintegration of the party and the country.

Like a Lothario wiping his bottom on the silk bedsheets of his one-night stand, Zuma was unequivocal about who was at fault: the ANC. Us. Comrades who had asked him to “step down as president”. Not him.

He had made mistakes, Zuma told the presidential gala dinner last Friday, but these were only because he had dared to take action to make South Africa a better place for its people: “If you do nothing, you do not make mistakes … If you do something you are bound to make mistakes.”

The flippant disregard for his R250-million splurge of public funds on his private home, the Marikana massacre and the renting out of Cabinet and the parastatals to his Gupta blessers dropped like a lead balloon among his audience.

Whether the new leadership can pull up the handbrake on the ANC’s descent into careerism and self-enrichment remains unclear. Ramaphosa, who campaigned on a clean-up ticket, is saddled with an ANC top six that includes three members from the slate of his rival, Nkosazana Dlamini-Zuma, who was backed by Zuma.

The conference itself demonstrated all the characteristics of the ANC’s Zumafication: infighting, backstabbing, double-crossing, speaking with forked tongues and an obdurate refusal to move beyond leadership issues to discuss policy substantively.

The road to the conference was dirtier than downtown Jo’burg after a Pikitup strike — something outgoing secretary general Gwede Mantashe remarked on during a breezy final press conference with the media.

Describing how “securocrats” had “discredited” apartheid South Africa’s deputy prime minister Ben Schoeman so that he did not succeed the assassinated Hendrik Verwoerd in 1966, Mantashe said: “I saw signs of those dirty tricks coming into this conference.”

This was a searing indictment of the role played by the state’s intelligence apparatus, which Zuma has cultivated as a shadowy alternate structure to those that are supposed to run the country and the party over the past decade.

On the eve of the conference three separate high court rulings stopped branch members and ANC leaders from three provinces from voting. The reduction in the delegations from the Free State, North West and KwaZulu-Natal seemed to have swung some results Ramaphosa’s way.

It also underlined the emergence of “lawfare” among disgruntled ANC members who have increasingly resorted to the courts because of a sense that the party’s internal processes have become anti-democratic.

The law book-ended the conference. Zuma may not have shuffled off into the sunset in leg irons but supporters of former ANC KwaZulu-Natal premier Senzo Mchunu have written to the ANC threatening legal action if the impasse over who had won the secretary general post in the top six, Mchunu or Free State Premier Ace Magashule, was not resolved by the inclusion of 68 “special votes” that had not been counted in the final tally. The votes may affect the 24-vote difference between the two.

Controlling the ANC’s secretariat is essential to whatever project — self-correction, the entrenchment of state and party capture, or a turbulent mishmash of the two — gains momentum in the party over the next five years. The secretary general steers the ANC on its daily path and the position is coveted by both factions because it will mean control over how the party is run and how support is consolidated in it.

Ramaphosa campaigned on a ticket that stressed a clean-up of party structures from the branches upwards. If he is to follow through on these promises he will have to work with a secretary general whom the courts have twice found to have violated the party’s democratic processes in ensuring he stays in power as Free State chairperson.

Of the changes ushered in by Nasrec 2017, a few were seismic. Zuma is gone. That is huge. KwaZulu-Natal has been humbled. That is big.

As the ANC’s largest province, KwaZulu-Natal swaggered into the conference confident that its membership mkhaba would help to bulldoze Dlamini-Zuma into the presidency and continue the state and party capture entrenched during Zuma’s tenure.

KwaZulu-Natal’s leadership, the flat-track bullies who had dominated the voting in Polokwane and in Mangaung in 2012, was outflanked by Mchunu, who marshalled dissidents in the province to break its previously homogenous pro-Dlamini-Zuma stance.

KwaZulu-Natal leaders such as Sihle Zikalala and Super Zuma — respectively provincial chairperson and secretary before last week’s court ruling confirmed they had been elected undemocratically — appeared disorientated during the conference. They roused their supporters to sing pro-Dlamini-Zuma songs, shouted down speakers in credentials but offered little else once the writing was on the wall. And it was writ large with lurid spray paint: maskandis who sing and dance down intellectual discussion in the party ain’t gonna win this one.

It was clear from early on that the elections of leaders and the national executive committee (NEC) , not policy, would dominate this conference.

The dais on which the NEC sat in the conference hall became a microscope during a delay in the announcement of the electoral results for the top six.

Every movement and facial expression of leaders sitting there was nterpreted. Lindiwe Sisulu sat alone before the results for deputy president proved that she was alone.

NDZ supporters, such as Energy Minister David Mahlobo and Lindiwe Zulu, the minister of small business development, attempted brave faces, which did little to hide their disappointment at the end of Daddy’s Decade.

“Unity” candidate and ANC treasurer general Zweli Mkhize looked like someone had murdered his parents — and not in the comrade Carl Niehaus way — as he contemplated saving his political life among the detritus of the ANC’s politics.

Mpumalanga Premier David Mabuza was the big winner; his singular playing of both slates saw him emerge as ANC deputy president.

“Unity”, according to Zuma’s final speech as ANC president, is the “rock on which the ANC is founded” and needs to be returned to the party.

The past decade has made obvious that the rock Zuma refers to is the mbokodo of his days as top ANC spook — the stone that grinds down opponents and erodes the integrity of institutions ranging from the ANC to the National Prosecuting Authority.

Whether Ramaphosa can raise the ANC, and the country, from this fine dust will depend on what consensus his top six and new national executive committee gel on in their vision for the future.