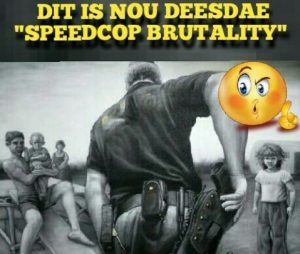 We all know that sometimes there are policemen who enforce brutality beyond limits, but if I have to face so much crime every day, especially at the rate of crime in South Africa, my fuse will also be short. Understandable, though not always acceptable when racially linked.

Nowadays, the citizens are often harassed and threatened by traffic men and women, who force their “newly discovered “power” on people. I know of a personal case of a woman who was so severely intimidated at Bethal 2 pm in a main street that she had nightmares for weeks afterwards, and she had done nothing wrong.

It is absolutely insane how the hell is loose these days are loose in the cities and on roads where they are hiding like hungry …….. around every corner to catch people for every little thing, to loot and humiliate them. It is no longer just one incident, those who managed to take videos are in the minority. THERE are HUNDREDS OF CITIZENS THAT JUST KEEP QUIET AND PAY A BRIBE TO GE RID OF THE HARASSMENT.

It can not go on like this. Action must also be taken to protect the citizens of the country against the members of the public service who may abuse their positions to instil fear and pain in the citizens.

Also, don’t think it’s just on the whites, other races are also targeted. It is about money, power and largely also corruption.

This matter MUST be addressed, it is bad enough to try to avoid criminals on roads, and now the citizens still have to be intimidated and threatened by ordinary road traffic officers.

The officers must be reprimanded countrywide and taken down from self-made thrones. They are set to be in the SERVICE of the citizens and not to carry a reign of terror on roads. Or implement a business like the MAFIA on roads!!

They must be sued for emotional pain and all that goes with it. People must stand up for their rights and the political parties with power and authority can also make their mark in this trend, before it escalates in an uncontrollable situation like in Zimbabwe. Where you are harassed on every corner by them.