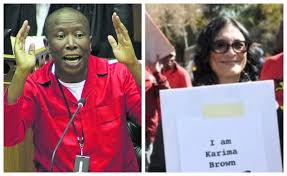 The EFF has lost another court battle, and this time, it is against Karima Brown. The veteran journalist has won her case of harassment against the party.

One of the ugliest battles between the media and politicians took a significant turn when the Johannesburg High Court ruled in favor of Karima Brown in her harassment battle against the EFF.

How Karima Brown vs the EFF began
Karima Brown was initially targeted because they accidentally received one of her editorial notes. She had advised her colleagues to “monitor” an EFF gathering back in March but accidentally sent it to a group chat meant for party members. They took offense to her plans and began to hound her online.

Juju, with a following of 2.3 million people on Twitter, then shared her message on his page without obscuring the contact number. What followed next was a barrage of abuse, disgusting threats and vows to take her life.

She also faced several rape threats and was confronted by a slew of violent messages. The High Court in Johannesburg sided with Brown, agreeing that the publication of her private details caused her some serious distress.

What happens next?
Previously, Karima Brown has asked the EFF – and Julius Malema in particular – for an apology as part of her case. However, Juju isn’t exactly one to follow court orders. His defiance of multiple rulings against his land grab claims has seen AfriForum successfully sue him on five separate occasions, so humility may remain in short supply.

Karima Brown could take the EFF to the cleaners
But what could be a real kicker for Malema is the amount in damages Karima Brown is seeking. She wants R100 000 from the EFF leader, who is currently racking up the legal expenses.

Geoff Budlender was the advocate representing Karima Brown. He told the courts that Malema has breached both the Electoral Code and the Electoral Act. The lawyer accused Juju of having “no basic knowledge of the law”, saying he can’t accuse people of being agents of the ANC “without any evidence”.

The EFF posted a one-sentence response to the judgement. Top marks for passive aggressiveness, guys: 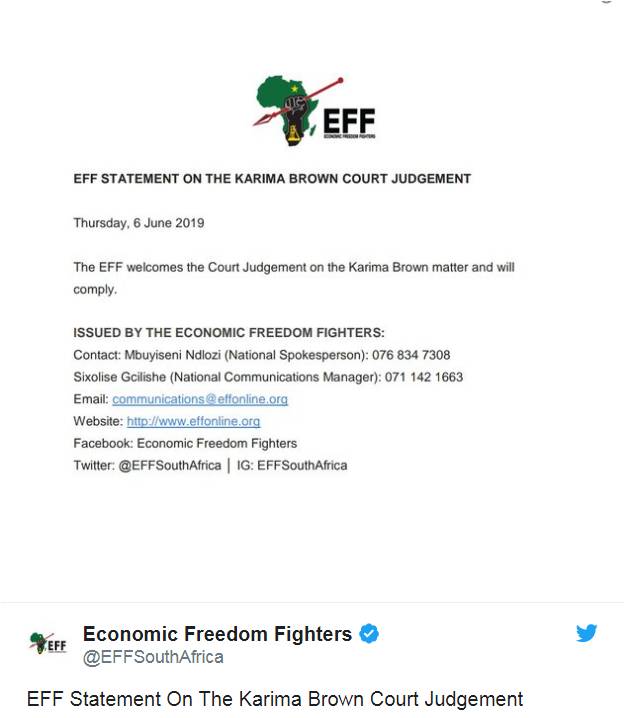