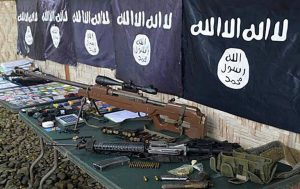 A house in Reservoir Hills is alleged to be used as a training facility for terrorists.

Eleven men have been arrested and accused of planting explosives in the city.

They’re also linked to a murder at the Imam Hussain Shia mosque in May, as well as the kidnapping of a local businessman.

Court papers detail how ISIS flags, propaganda manuals and bomb-making material were apparently discovered inside this house during a raid by the Hawks.

The State alleges this group of men is supportive of ISIS and its teachings about “financial jihad”.

This involves punishment of non-believers by robbing them of their wealth.

Security analyst Jasmine Opperman explained: “There has been infiltration, there have been people vulnerable to their ideology.”

Muslim leaders say, until now, they were not aware of any extremist behaviour in their midst.”

The bail application continues in the Verulam magistrate’s court on Thursday.