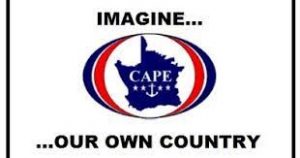 Our first hope is that the ANC-controlled SA government engage in immediate negotiations to bring an end to the long-standing political, social and economic oppression that they have imposed without challenge on the Cape and its people to this day.

By allowing for greater provincial control over our own economic, social and political affairs we will, at the least, be able to relieve our people of some of the daily persecution we endure.

If the opportunity to negotiate fairly is not possible, then the Cape Party will be left no option but to use all legal and peaceful means to bring into effect greater autonomy of the Cape from the Republic of South Africa, or pursue complete independence… The Cape Republic.