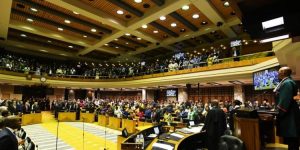 If you’re an MP and someone has gone all out for your birthday, you’ll have to tell Parliament. In fact, there are many private things you have to make public.

As our sixth Parliament convenes for their first day on the job, there will be a few fresh faces coming into the National Assembly. Hopefully, they’ve had time to read the House’s Code of Conduct, because there are plenty of rules to follow.

Honesty is the best policy in Parliament
Keeping secrets from Parliament is a mug’s game. If you get exposed for telling porkies as a politician – which, to be honest, comes with the territory – it can land you in front of an Ethics Committee hearing and put your job on the line. The general rule of thumb is this: If you have any sort of business interest, it needs to be declared.

Plenty of politicians have other businesses that help them rack-up the cash while they also enjoy a Parliamentary salary. Those taking up positions as MP have to resolve any financial or business conflicts of interest. Mingling with any state-owned entities is a big no-no, and if any other businesses receive government funding, you’re also in trouble.

In these extreme examples, nominated members would have to give up their day-jobs and commit to Parliament. Trying to hide either of those two bombshells is pure, unfiltered corruption – you could eventually end up in a court of law if your misdeeds were serious enough.

What do you have to declare as an MP in South Africa?
But it’s not just a case of money, businesses, and profits. Many of your personal interests also come under the microscope. If you’ve got something to hide, we’ve got bad news for you: All the following must be declared:

~ Any stocks, shares or other financial interests in companies and other corporate entities.
~ Any paid employment you’re involved with outside of Parliament.
~ Directorships and partnerships.
~ Consultancies and sponsorships.
~ Gifts and hospitality in excess of R1500 from someone who isn’t a family member, partner or “companion”.
~ Foreign travel that doesn’t fall under the category of personal trips, non-Parliamentary business trips or official government business.
~ Ownership in land and property including land and property outside of South Africa.
~ Pension funds and contributions.
~ Public contracts awarded.
~ Trusts and encumbrances.

Punishments for breaking Parliament’s Code of Conduct
So, what happens if you get caught trying to trick the system? It’s worth noting that more serious offenses can be taken to a higher authority, but in general, the Committee must recommend the imposition of one or more of the following penalties where a Member has breached the Code of Conduct:.

(i) a reprimand in the House;

(ii) a fine not exceeding the value of 30 days’ salary;

(iii) a reduction of salary or allowances for a period not exceeding 30 days; or

(iv) the suspension of certain privileges or a Member’s right to a seat in Parliamentary debates or committees for a period not exceeding 30 days.

If you are an MP that gets caught with your hands in the till, resigning from Parliament won’t be enough to clear your name. The committees which assess these breaches are required to continue their investigations whether the member ceases to serve the public or not. There’s no escape from the long arm of Parliamentary law.