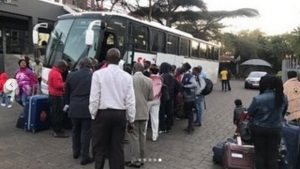 Nigeria announced this week that it would repatriate about 600 nationals after the recent attacks on African migrants in the Joburg CBD.

The group was taken to OR Tambo International Airport on two buses from the Nigerian consulate this morning.

Nigeria announced this week that it would repatriate about 600 nationals.

Twelve people have been killed and hundreds more arrested during days of looting and rioting.

More than a dozen Nigerians were waiting at the Nigerian consulate in Rivonia, hoping for transport to take them to the airport so they could return to their country.

They were carrying their luggage and holding on to their passports.

One Nigerian man had been living in South Africa for 13 years.

Another man said that he lost everything when his property was torched in the Johannesburg CBD during the recent violence.

He said that he studied in South Africa and hoped for a brighter future but believed that the only way to survive was to go back home.

“I used to teach before I came to this country. I think it would be a good opportunity to start again.”

There was no guarantee at this stage whether a third bus was on its way to fetch the Nigerian nationals waiting at the consulate but they said it was worth taking a chance.