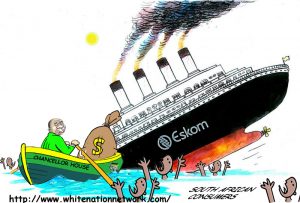 The hostage drama in which Eskom has captured the ANC regime has now reached its highest point of arrogance.

With a new demand to get R59bn intended for the next two years for mismanagement, all reasonable limits have completely surpassed, say economic experts and informed businessmen.

Eskom’s debt burden is already so high that there is almost no possibility that the struggling power provider will ever be able to recover it.

With the decline in electricity demand, South Africa is on the verge of a total economic collapse, and the worst can be expected in the coming weeks.

Finance Minister Tito Mboweni’s suggestions that Eskom should pay its workers less and have less unions on their feet, ready to make the country even more unmanageable.