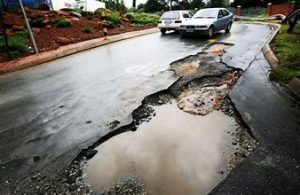 Water flowing in streets and roads looks like small rivers and is becoming dangerous because of increasing potholes that can damage vehicle tires.

Several incidents have already occurred from potholes that are invisible due to the water on the driving surface, and tires are damaged which means a tire needs to be replaced in the rain.

A government spokesman warned motorists to drive very carefully where the wet roads are slippery and often have large potholes that are formed after heavy rains.

The danger also exists that a damaged tire can create the vehicle to imbalance and cause accidents. Driving to fast in this rainy weather can increases the risk of dangerous accidents.

Roads become more dangerous due to heavy rains that cause flooding, and smaller potholes become larger and sometimes much deeper, increasing tire damage.