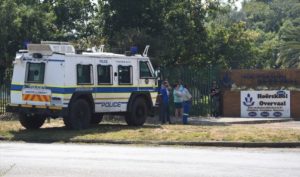 The Afrikaans medium high school made headlines earlier in the year after 55 English pupils were denied enrolment, stating that it had reached full capacity and could not afford to employ a handful of English teachers who would accommodate the prospective learners’ needs.

The Constitutional Court ruled on Thursday that Lesufi had not given enough consideration on whether neighbouring English medium schools such as General Smuts and Phoenix high schools, which both fall in the same feeder zone as Hoërskool Overvaal had enough capacity to admit the pupils.

The school had been ordered by the Gauteng Department of Education to accept English-speaking pupils and refused, taking the matter to the High Court and won.

This saw hundreds march to the school, as the South African Democratic Teachers’Union (Sadtu) gathered outside the school in protest over its language policy, which it deemed as a means to exclude other racial groups from admission.

Several other groups were also present at the march, as members of the Congress of South Africa Students (Cosas), as well as the Economic Freedom Fighters (EFF) were also accounted for, while parents and other community members also pitched in to ensure that normal proceedings at the school occur.

However, the latter was not to be as the pupils were told to stay away from the school for a brief period for the sake of their safety.

One man who checked in at the school on Facebook invited the wrath of the Democratic Alliance, which laid charges of incitement of violence after he called on then-president, Jacob Zuma to supply arms for “one bullet, een boer”.