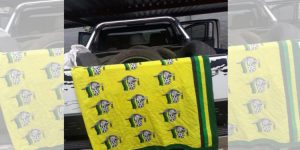 Herman Mashaba has today released a statement condemning the African National Congress (ANC). He claims the party “sits behind the violent protests which have rocked the city and other DA-led municipalities across the country.”

In addition, the statement references a picture of an ANC-branded vehicle loaded with tyres. Johannesburg Mayor Herman Mashaba also posted the photo to his twitter feed.

The vehicle allegedly belongs to an ANC member
The JMPD subsequently searched the vehicle. They seemed to confirm that the car at the very least belongs to an African National Congress member.

“ANC branded vehicle which was loaded with old tires […] ANC paraphernalia, branded material as well as delegate accreditation cards of 2 ANC members for the ANC Gauteng List Conference in December 2018.”

The statement makes it clear that party leader Mmusi Maimane would be intervening. The DA was treating this as an ANC-organised attempt to destabilize DA municipalities before the elections. 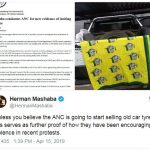 The Ad Hoc Joint committee should consist of the Portfolio Committees on Police, Cooperative Governance and Traditional Affairs, and Home Affairs, “to get to the bottom of these violent protests.”

“The DA will not quiver in the wake of the ANC’s destruction. In the absence of any leadership from the ANC and their president, the DA Leader Mmusi Maimane has requested an urgent meeting with both the National Police Commissioner, General Khehla Sitole, and the IEC Chairperson, Mr Glen Mashinini.”

The ANC has not issued a statement at the time of writing. However, it’s unlikely they’ll be able to brush the allegations off. It’s quite possible that this matter may find its way in front of the courts.

Moreover, the DA accuses ANC top six and Fikile Mbalula of orchestrating “dirty tricks” as part of their election campaign. 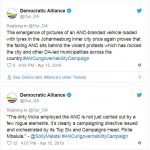