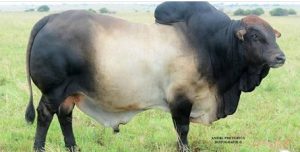 Mr Million, a stud bull for which his owner paid R1 000 000, had to be put to death after savage cattle meat raiders – you can imagine from which race – struck at a farm outside Brits in North West last Friday night.

To Africans he was just a piece of meat for eating, to Europeans he was an investment that would propagate many fine quality off-spring to improve yields and feed many.

It was a typical hacking gang that slash the cattle to death with machetes and then chop up the meat on the spot to carry it away. The hacking gangs that struck regularly on South African farms first slash off the hind leg tendons of the cattle so that they can’t run before hacking the cattle into pieces whilst they are still alive. The night guard arrived on the scene just after the hacking gang started to hack Mr Million. His hind tendons had by then already been hacked off and he already had deep slashes over his head and back. The hacking gang had by then chopped up several cows and fled with the meat.

The owner of the farm, Mr Ockert Werner, says he lost 4 cattle in this way this month alone. Mr Werner bought Mr Million in 2011. He says he was very sentimental over this stud and rubbed his head every day where he was standing in his camp. Mr Million was still in use and walked with a herd of cows and Mr Werner said he wanted to give the stud a dignified retirement one day. He says it breaks his heart to lose Mr Million in this cruel way. Mr Million originally came from the Eastern Cape and was a boran stud bull.