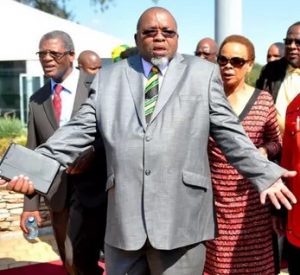 The Minister of Mineral Resources, Gwede Mantashe, became the laughingstock of the world with his speech at a conference in Australia.

The speech written by someone then made the outrageous mistake of inserting an April joke as part of the speech, which indicates that South Africa had discovered a new mineral, and he couldn’t boast enough about this new wonderful discovery.

The April joke also states that the new mineral has been discovered in the Western Cape, and the minister says the mineral is essential for the production of battery storage technology.

The nonsensical joke proclaimed to be the truth made listeners in the conference wonder if the speaker was going senile, as it had nothing to do with the actual topic of the conference.

The information originally came from an April joke that was handled by an extremely ignorant speech author, and an ignorant minister in a laughable way.