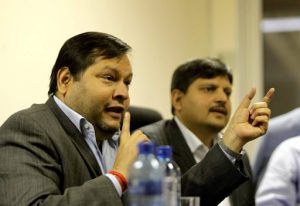 The family at the centre of state capture allegations in South Africa is planning to throw a lavish wedding for an estimated R43m at a ski resort in the Himalayas.

The Times of India reported that “unprecedented arrangements” are being made for both Ajay Gupta’s son Suryakant and Atul Gupta’s son Shashank to tie the knot at the “picturesque ski resort of Auli situated in Chamoli district of the Garhwal Himalayas”.

A “bevy of industrialists, politicians and Bollywood celebrities” are expected to attend the bash. Guests will be flown to the resort in chartered helicopters, the publication reported.

The celebrations will reportedly be held over four days towards the end of June.

“Almost all the hotels and resorts at Auli have been booked for the week-long festivities, for which flowers are being imported from Switzerland,” reported The Economic Times.

The Times of India reported that the Guptas had met councillors in the district to discuss plans to transform the area into a “premier wedding tourism destination”.

The Gupta family has previously hosted lavish weddings for family members in SA at Sun City, in Turkey and most recently at the palatial Emirates Palace hotel in Abu Dhabi.

In 2013, the controversial family outraged South Africans by hosting a wedding extravaganza at Sun City that cost millions of rands, and arranged for guests to enter SA by landing at the Waterkloof Airforce base, a move that was demonstrative of their political pull at the time.

The AmaBhungane Centre for Investigative Journalism published a nine-page wedding invitation in February for a five-day celebration hosted by the family, at an estimated cost of R100m, between February 19 and 23 in Abu Dhabi.

Damning allegations have been levelled against the Gupta family in evidence presented to the state capture inquiry. Ajay Gupta said, in an interview with the New York Times in 2018, that he would testify at a commission of inquiry.

He was quoted as saying: “I want to clear my name.”