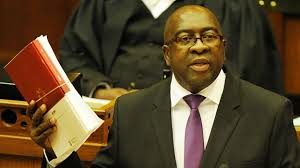 President Jacob Zuma issued a statement removing Nene from his post in December 2015, but the presidential address did not clearly outline the reasons behind Nene’s dismissal. He replaces Malusi Gigaba, who has moved on to Home Affairs.

Yet here he is, having the last laugh as he and JZ cross paths through the ANC’s revolving doors. We wanted to learn a bit more about him, and see what kind of politician we are getting back in cabinet

The Nhlanhla Nene Factfile: Just the four university degrees to his name He has B.Com honours in Economics and an Advanced Diploma from the University of the Western Cape. He also has a UNISA qualification in Economic Policy.

Nene has branched out overseas in his educational career, too. He obtained a certificate in Macro and Micro Economics from the University of London.

“You gotta fight, for worker’s rights” Whilst working at Metropolitan Life Insurance Company in 1990, Nene is credited with leading the first ever strike in our financial sector. He campaigned for better workers’ rights, and fought for five years under the banner of SACAWU.

Nhlanhla Nene was fired on 9 December 2015. He was replaced by David van Rooyen, but he was then dismissed from the role within three days, following an extremely negative reaction to his appointment. By 13 December, Pravin Gordhan had assumed the role, with van Rooyen swapping jobs with PG and becoming the Minister of Cooperative Governance.

Firing Nene saw South Africa lose shedloads of money We aren’t kidding. The Johannesburg Stock Exchange got slaughtered against international markets the next day. According to the DA’s David Maynier, the PIC lost R106.2 billion in just 48 hours after Nene’s removal.

The FTSE/JSE financial 15 index fell 13.36%‚ the FTSE/JSE banks index dropped 18.54% and the FTSE/JSE all-share index shed 2.94%. The rand fell a whopping 5% against the dollar, such was the toxic shock of the decision.

He’s the star of one of the greatest viral videos ever Okay. You probably did know about this one. But so much has happened since 2008, and we aren’t going to get a better opportunity to share this again than what we have right now.

Whilst being interviewed for SABC, Nhlanhla Nene’s chair seemingly began to buckle. Seconds later, he crashed to the floor and vanished behind the desk. The footage was leaked online and made Nene a reluctant internet star.

Perhaps he should join a standing committee? Or chair a few meetings this week? Sorry. We’re only human, we couldn’t resist.