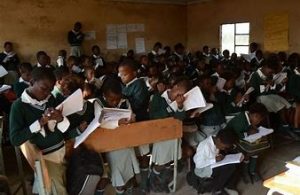 Cyril Ramaphosa approved the proposed education policy that allows learners to leave school in grade 9.  The move will allow learners to obtain a Grade 9 certificate and enter the workforce.

Angie Motshekga criticized her proposal for her fierce criticism but it now becomes official ANC policy. According to Ramaphosa, the move will focus on integrating learners sooner into the country’s workforce and the country’s economy.

With a matric certificate already worth little more than the paper on which it is printed, the step should be seen as an attempt to “improve” matric results due to a large number of learners leaving school at an early age.

Educators point out that the matrices do not find work, and that the Grade 9 pupils that leave school will increase the unemployment rate that will affect t SA to be graded more quickly to junk status in the economic field.