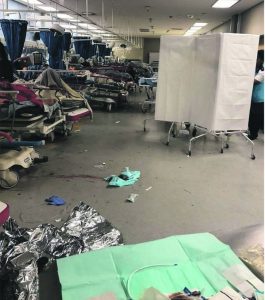 No healthcare facility in Gauteng was able to successfully pass a safety audit that complies with the Occupational Safety Act of SA (OHSA),according to a statement issued by DA Health spokesman Jack Bloom on Thursday. This means that all hospitals and clinics in Gauteng pose a safety risk to staff and patients.

This highlights how unprepared the state is for the planned National Health Insurance to be introduced.

Informed sources believe it is better not to go to the hospitals, as the risk of just being further affected or even die, has become too great.

“This information about the shock state of healthcare facilities is revealed by Gauteng Health MEC Bandile Masuku in a written response to questions in the Gauteng Legislature,” Bloom said.

The following facilities performed the worst:

According to Bloom, the Bheki Mlangeni Hospital was built only five years ago, but has a number of serious safety risks that include:

– Psychiatric patients escaping through escape doors that are a risk to themselves and others;

– Chained exterior doors, a risk to patients and employees in the event of a fire or emergency;

– The air conditioning is very hot in summer and very cold in winter due to a design problem, which also leads to cancellation of operations;

– An overcrowded accident and emergency that leads to cross-contamination;

– The record section is overcrowded with patient files, fire door doors are blocked and existing fire alarm systems are not working properly.

Other high hospitals include the following:

– Far East Rand Hospital – not compliant due to the unavailability of emergency exit routes and a fire detection system in most parts of the hospital;

– Mamelodi Hospital – a dysfunctional ventilation system in the accident and emergency unit;

“These are alarmingly high security risks and worse. We only know the risks in the facilities that have been audited, while most have not.”

Bloom said he was upset about occupational safety being neglected at hospitals and clinics in Gauteng, putting staff and patients at risk.

“We were fortunate that no lives were lost when there was a fire earlier this year at Bheki Mlangeni Hospital, but safety precautions must be put in place at all hospitals.

Gauteng Department of Health spokesperson Kwara Kekana could not be reached for comment.