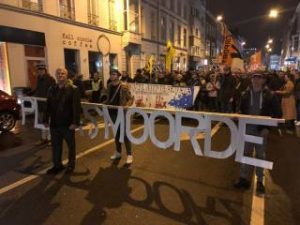 The FF-Plus and a delegation of the German ‘Alternative For German Party’ (AfD) met on Wednesday to discuss farm murders and expropriation of land without compensation.

The delegation was led by Sven Tritschler, a provincial MP of the German State of North Rhine-Westphalia.

The meeting is part of an ongoing action by the party, ‘Slaan Terug Suid-Afrika Campaign’, which aims to inform the international community about the current threat of property rights in South Africa and other human rights abuses.

Dr. Pieter Groenwald, the leader of the FF Plus, visited Belgium last week as part of this internationalization campaign.

Among other things, he participated in a silent protest march of the Flemish Interest Youth Action against farm murders in Gent as well as addressing the group, met European Parliamentarians and addressed the UNPO (Unrepresented Nations and Peoples Organization) presidency.

“If the Constitution of South Africa is amended to allow expropriation without compensation, it would be a breach of, inter alia, the United Nations Bill of Rights and International Convention on Human Rights,” said Dr. Groenewald.

Dr. Groenwald addressed UNPO’s thirteenth general meeting in the Scottish Parliament in Edinburgh for self-determination, saying self-determination is an internationally recognized and accepted principle that entitles minority groups to protect themselves from assimilation and subsequent disappearance of a minority.

He said self-determination was entrenched in the United Nations Charter (UN) and the International Declaration on Civil and Political Rights as a right of “all people”.

Dr. Groenewald’s visit comes after the New Flemish Alliance (N-VA) also held a seminar at the Belgian Parliament on farm murders and the ANC’s property expropriation without compensation policy.