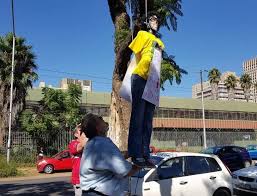 The Gauteng Education MEC was left shell-shocked when he walked outside his office to find peopling “hanging” a doll of him.

South Africans are furious after a tweet from Gauteng Education Minister Panyaza Lesufi went viral for all the wrong reasons. While the issue involves Lesufi, the fury is definitely not directed at him.

On Wednesday afternoon, an effigy of Lesufi was dressed up and placed outside the national education department’s offices. The doll was dressed in an ANC shirt with Lesufi’s face as well as a printed mask on the head. An afro wig was also placed on the doll.

The MEC was being criticised by the men for his perceived stance against Afrikaans language schools. He says he is being harassed and even threatened by rightwingers.

“These morons came to our offices to ‘hang’ me! We defeated your racists grandparents‚ you are nothing!‚” he tweeted.

The ANC in Gauteng has slammed the incident and accused the men of trying to undermine the building of a non-racial society.

“This brazen act by anti-transformation agents flies in the face of the supremacy of the Constitution of the Republic of South Africa, which advocates for equality and the advancement of human rights and freedoms including non-racialism.”

“It follows several threats Comrade Panyaza has been receiving, together with his family, after the ANC-led government’s decision to change the language policy at certain schools in the province from Afrikaans only to parallel medium schools.

“This is aimed widening access for many scholars whom without this intervention will remain disadvantaged and excluded from accessing their basic right to education.

“What is very clear from this latest incident is that the recent judgment meted out to convicted racist Vicki Momberg, which sets a precedent for other racial related cases, has not had the desired effect as those that are hell-bent on dividing out society along racial lines still feel the need to defend their apartheid racial legacy.”