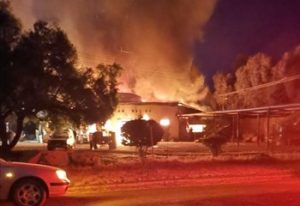 A municipal building was set alight in the Boshof area in the Tokologo Local Municipality in the Free State, just a few days after residents of Seretse Township near Boshof embarked on an illegal protest against the municipality on Wednesday.

Police spokesperson, Thabo Covane, tells OFM News the disgruntled residents were warned by the Public Order Police that the strike was illegal, adding the police nonetheless still escorted these residents to their destination.

Covane says during this some of these residents blocked the main road, and 26 of them – including the leader of the protest – were arrested but were later let off on a warning. He says the police have since opened a case of public violence regarding the protest and the burning of the municipal workshop in Boshof.

Covane adds residents broke into at least eight local businesses, and that police were deployed to monitor the situation. Covane says according to information the burning of the municipal building occurred Friday night around 11:00 pm and 12:00 am and nobody was noticed near the area.