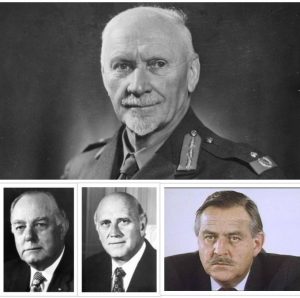 One sold the Boers out to the British, one organized the assassination of Verwoerd– one sold South Africa out to the terrorist ANC- and one acted on behalf of the New York Jews to oversee the transition of South Africa into terrorist hands.

Interestingly both De Klerk and Pik Botha’s wives died under very mysterious circumstances. BUT these that know who the perpetrators was that was responsible for the deaths of those two women rather will reserve judgement until the day this two evil henchmen appear before a just board of inquest- if they did not already start spilling the beans at judgement day already. TODAY yet another black liberal- Cyril Ramaphosa– is busy selling South Africa out to the Chinese- piece by piece. Still the conservative just sits there….doing NOTHING again!

Long story short after Verwoerd was murdered and under the liberal demonic reign of Voster the country started it’s sliding downhill towards certain destruction. The liberal demons in the form of the British M16 secret service, American CIA, National Party, the ANC,PAC and front runners such as Helen Suzman, Max Du Preez, Helen Zille, Zach De Beer, Nadine Gorimer, Vorster, the Dutch Reformed Church, Anglican Church and many more began in all earnest to work towards the final count-down of the conservative way of life in the country- which finally was achieved in 1994 when at last the country was handed over on a platter to the liberal demons of Satan to do with it as it pleases.