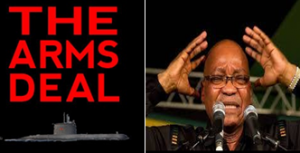 Why was there an arms deal? – Newly democratic South Africa decided its military needed to be overhauled – and five years after coming into power following the end of white minority rule, the African National Congress (ANC) government signed contracts totally 30bn rand ($5bn; £3bn in 1999).

Update on current situation:
The arms deal has most recently been in the news as Jacob Zuma is currently fending off corruption charges related to it. His legal team has applied for a permanent stay of prosecution in his corruption trial in the KwaZulu-Natal High Court in Pietermaritzburg.

Together with his co-accused, French arms dealer Thales, Zuma is attempting to stave off attempts to face trial for 783 questionable payments he allegedly received improperly in exchange for saying he would protect the company from possible future criminal prosecution.

The commission, or Arms Procurement commission, was set up in 2011 by the then-minister of justice and constitutional development, Jeff Radebe, at the behest of former president Jacob Zuma to look into allegations of fraud, corruption, impropriety or irregularity in the Strategic Defence Procurement Packages more commonly known as the Arms Deal.

The arms deal saw the government acquiring, among other things, 26 Gripen jet fighters and 24 Hawk lead-in fighter trainer planes for the SA Air Force, as well as frigates and submarines for the SA Navy.

Corruption Watch and Right2Know said in a statement that the court action came “after several years of dogged scrutiny of the flawed processes and ongoing efforts to hold those implicated in the alleged corruption in the arms deal accountable”.

It added that the organizations’ application argued that “the Seriti commission failed miserably to conduct the most routine of investigations, arriving at the implausible conclusion that there was no evidence of corruption in the arms deal”.

Jacob Zuma still has many supporters despite his legal problems.
A High Court judge said the decision by the National Prosecutor Authority (NPA) to drop the charges in 2009 was “irrational”.

After reading the links attached please help to further world wide awareness by sharing this post FAR and wide, with thanks and Kind Regards, From.
Admin.
For #BreakTheSilenceAboutSouthAfrica