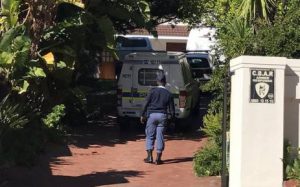 Cape Town Police say an autopsy will be conducted to determine the cause of death of Naspers former Financial Director.

The 81-year-old Eric Wiese was attacked outside his home in the elite suburb of Higgovale in Cape Town on Friday afternoon.

It’s understood his killers then dragged him from outside into his home and murdered him.

The suspects stole some household items, which the family say did not have significant value.

A team of forensic experts were still combing the crime scene on Saturday afternoon.

The 81-year-old’s devastated widow Sannie Wiese says the house has all the security features, but she has never felt unsafe living in the plush suburb.

But Some Higgovale residents claim there’s been a surge in home invasions in the area recently.

“Wednesday last week, one of our neighbours’ house was broken into and things were stolen.”

Wiese’s son, Andri, who lives in the United States, had been visiting his parents to celebrate his birthday.

He was with friends when he received the devastating news that his father had been murdered.