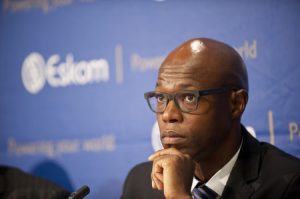 Matshela Koko, former acting CEO of Eskom will be back at work on Monday January 8 in the role of head of generation‚ according to Eskom spokesman Khulu Phasiwe.

The information that Koko had been reinstated was sent in an internal memo from acting CEO Sean Maritz to senior Eskom staff on Tuesday and was leaked to the media.

Acting head of group capital Prish Govender‚ who was implicated in paying half a billion rand to Gupta-linked company Trillian‚ was also reinstated.

Koko faced six charges in his disciplinary hearing‚ including being influential in awarding contracts worth R1-billion to company Impulse where his stepdaughter is a shareholder.

DA’s spokesperson on Public Enterprises Natasha Mazzone slammed the fact that the announcement was quietly done in an internal memo. “Had the memo not been leaked‚ South Africa would not have known Koko had been reinstated.”

Mazzone said there should have been a press release by Eskom about the reinstatements. “They (Eskom management) were hoping were the announcement would go under the radar.”

Mazzone said state-owned enterprises‚ including Eskom‚ are owned by the people of South Africa. “We South Africans are the first people that should have known Koko had been reinstated. How can you not tell the owners of a company what is going on?”

But Eskom spokesman Phasiwe had a different take‚ telling media that the Eskom board announced yesterday that Koko had been reinstated after he was cleared in the disciplinary hearings.

It was reported by media in December that Koko had been cleared of all charges and would be reinstated at the power utility. Phasiwe said the board would neither confirm or deny that last month. “Having discussed the [investigation findings] with Public Enterprises minister Lynne Brown‚ the board announced it yesterday (on Tuesday).”

In his hearings‚ Koko submitted that Eskom could produce no evidence at the hearing or during forensic investigations that he had any influence over the awarding of the contracts to the company linked to his step daughter.

His hearings had been described by analysts as a farce‚ with some key witnesses declining to give evidence. Lawyer and evidence leader Sebetja Matsaung‚ who was later fired‚ owned shares in a company Eskom had planned to work with.

Mazzone added that given the “chaos and sham that was Koko’s disciplinary hearing‚ it is highly disappointing it was not started afresh”.