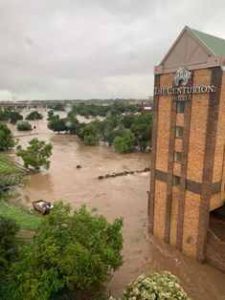 Continuous rains in the Central Transvaal are disrupting traffic but in Centurion buildings, roads and low water bridges became dangerous.

Large areas are flooded, and many vehicles are being swept away by the floodwater, but to date it is unknown whether any people died in the floodwater.

In some places, more than 280 mm of rain has been measured for the past week, and meteorologists predict even more rain for Tuesday.

Chaos has arisen on roads and some streets, and load shedding has also caused long queues of vehicles to stand by robots that do not work.

Meanwhile, Die Vryburger learned that parts of the Northern Cape that had not been raining for four years now are “past the stage where drought relief will help”, one of the farmers said.