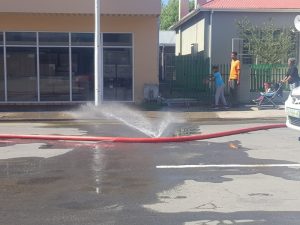 Is civilization too complicated for Africa? A huge fire destroyed De Aar’s Courts. The volunteer fire squad arrived with the town’s 30 year old fire truck but could not extinguish the fire due to leaking fire hoses.

De Aar was shaken by a huge explosion last night at 21:45. Only about 2 hours later a huge fire was spotted at the local Magistrates Court. The part of the building that was destroyed houses the Roving, High and Regional court. So in effect De Aar don’t have Courts anymore.

The suspicion is that the fire was started by electricity supply to the town that was too high, because of faulty equipment. De Aar do not have a fulltime Fire Department and only uses a voluntary fire service. When they finally arrived with the town’s 30 year old fire truck, their efforts to put out the fire were hampered by fire hoses that were leaking. A spokesperson from the municipality says there is no money to finance a full time fire service.

If they are not blaming “apartheid”, they are blaming lack of money… wonder where the money went?