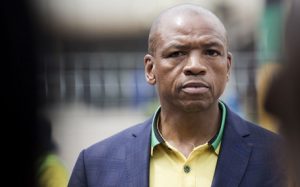 It emerged in April that a R1 million bursary had been awarded to Oarabile Mahumapelo to attend flight school.

Denel has conceded that a bursary granted to the son of former North West Premier Supra Mahumapelo was illegal.

It emerged in April that a R1 million bursary had been awarded to Oarabile Mahumapelo to attend flight school.

Denel on Wednesday told Parliament’s Public Enterprises Committee that it has cancelled the bursary and is reserving its right to recover the money.

Denel awarded a bursary to Oarabile Mahumapelo that was not to exceed R1.15 million.

But a forensic investigation has found that the air school was not an approved study institution in terms of the state-owned company’s bursary policy.

It was awarded without following the selection process.

Denel board member Talib Sadik: “The bursaries were not advertised as required by the policy nor was it approved by the bursary committee of Denel and as a result of that we’ve terminated the bursary policy.”

Denel’s former chief executive Zwelakhe Ntshepe previously denied the bursary was not above board and has since resigned.
By: EWN