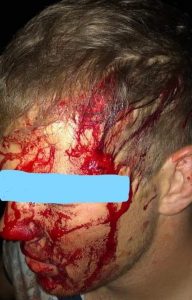 On Christmas eve 21.15 hrs, a farm-family in the Rural area of Paarl, was having their x-mass gathering and enjoying the celebration of the birth of Christ.

They had no idea, they were being watched by at least 2 culprits wearing balaclava, who were dropped of by a vehicle to do the robbery. The culprits had cut through the fence and apparently tried to open the main house windows to gain entry, while the family was on the stoep.

It was for one of the farmers sons to go and get something from his vehicle, when he stumbled upon the culprits. One of the men, hit the son with a blunt item on the side of the face, causing injuries.

In the fight which erupted and whereby the rest of the family got involved, one culprit was apprehended

The brave son, was taken to hospital for stitches.

Within minutes, the Drakenstein Farm-watch was alerted regarding 1 culprit still on the loose and assistance needed. The massive radio network and the control-room operators play an important role in the coordination of efforts.

Many armed response members of the Drakenstein Farm-watch were enjoying dinner with family as well, but without hesitation a big group responded to the outcry and in numbers the area was searched, joined by the farm-watch partners Fidelity ADT.

It was clear, that the culprits had bad intentions.

A cell phone was retrieved and it was clear, there had been contact with the outside during the attempted robbery. It became also clear, it was a call to the pick-up vehicle.

Now a plan was made and the joint teams of Fidelity ADT and the Farm-watch crew went into hiding, waiting for the pick-up car to show.

The tactic was successful and little later a vehicle slowly entered the trap, not knowing he was already watched when he entered the area. On the spot of the attack, the vehicle was stopped and the driver apprehended. The cell phone of the driver had the last dialled number of the culprits still on it.

Police were called to take over the arrest and to go and see all evidence gathered including video footage.

X-mass eve 2018 got a slightly different ending to what all had in mind.

A big thank you to Fidelity ADT and the armed response group of the Drakenstein Farm watch.
No names of alleged culprits, participating members, or Fidelity ADT officer mentioned, nor the exact place, as one can imagine pending the police investigation.

Picture shown, victim of the attack.This report does not necessarily reflect the opinion of SA- news.