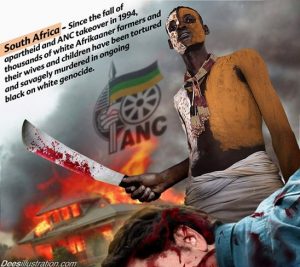 One of the latest incidents this week occurred on a farm between Hartbeespoort and Brits where a 73 year old woman was attacked.

The 73 year old woman, who fired a number of warning shots did not deter her attackers who continued in their attempt to break down the main bedroom door. Only after she alerted the local neighbourhood watch for help, did the attackers flee.

The farm attack took place Between Hartbeespoort and Brits in Bokfontein, North West province on 29 October 2018, at about 22:00. The woman was woken by the noise of her door being broken down, she is traumatised by the attack, but thankfully sustained no injuries.

Mooinooi Police are investigating the case.

If we sit back and think about this incident we can come to the conclusion that these terrorist did not come for a nice visit. They did not come for cake and tea, they did however come to steal, degrade and kill a harmless old lady. This is happening all over South-Africa on a daily basis. Mainstream media is keeping quite about it, government is ignoring the situation but in the mean time the white minority citizens of South-Africa is being brutally attacked, murdered and raped. This is white genocide at its best!