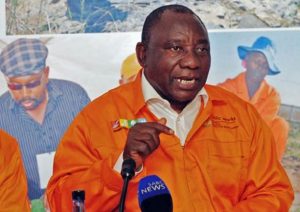 The ANC’s president is not above the law, and his so-called cases of dismissing 22 of his 46 farm workers could land him in the Labor Court. Cyril Ramaphosa dismissed the farm workers in his service, and used the excuse that it was a business decision because foot-and-mouth disease could threaten his cattle herd. No one has yet been able to explain what the illness has to do with his staff’s dismissal, and now unions apparently want to drag their president to the Labor Court.

The farm workers’ union, Fawu, is apparently at the forefront and has threatened to take President Cyril Ramaphosa to task over allegations that he retrenched over half of his Ntaba Nyoni farm staff, in October. According to the union they are protecting their members against “unlawful” retrenchment, but whether the union has the courage to act against its president will learn the time, political analysts say. What is unfair, however, is that the president may not be held accountable for his “business decision”, while it is precisely his government’s labor law that is being violated .

The farm’s Operations Manager, Ben Molotsi, has refuted claims that the workers were laid off without compensation.
A Sowetan report alleged that, in October, Ramaphosa had travelled to his Ankole cattle farm in Ntaba Nyoni, Mpumalanga, to inform 22 of his 46 employees that they were relieved of their duties.

This, it was alleged, was due to the recent outbreak of Foot-and-Mouth disease, a severe and highly contagious virus, that had affected trade conditions in parts of Mpumalanga and Limpopo.

According to Molotsi, the lay offs were a contingency measure to protect the workers from contracting the disease, and prevent the business from liquidation.

“We know it’s not nice to retrench people, but this was a business decision… Actually the employees themselves wrote their names and submitted that it’s better we retrench because when the business is doing good and back on track they will get first preference as former employees whom we have invested a lot experience on them,” Molotsi said.

This is contrary to the information Fawu has received, according to a recent IOL News report. Fawu’s regional secretary, Ernest Mmako told the cited publication that some of the workers have complained about how the retrenchments have left them without income, just weeks before the Christmas holiday season.

Simangele Ziqubu, one of the workers who was laid off, expressed her disappointment at how Ramaphosa could retrench her and her colleagues after years of servitude at his farm, taking care of his prized Ankole cattle.

“How can Mr Ramaphosa fire us before Christmas? I have to buy food and things for my kids for Christmas. I don’t know what I’m going to do now,” she said.

Mmako has since noted that Fawu will send representatives to Ntaba Nyoni, and hold engagements with the retrenched farm staff.

“We will mount a battle against that retrenchment and should it be that he has already implemented that decision we will be left with no other option but to approach the dispute resolution institutions, your CCMA and ultimately the Labour Court,” he said.

Molotsi has outrightly rubbished allegations suggesting that the workers were laid off with no financial provisions to see them through this short period of unemployment.

He claimed that the retrenched staff had reached a settlement with the president that once the threat of the disease has been removed and trading improves, they would get first preference to return to their posts over new prospective workers seeking employment.

“We have done all processes for retrenchment, they were alerted earlier, they got their 13th Cheque and we have paid them retrenchment severance up to 18 days and they were also paid their day offs too,” Molotsi said.

“We also promised that if one needs to study, to maybe start a business, the company will pay half of their skills development courses,” he added