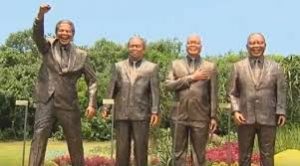 Two new statues of terrorists will cost Durban taxpayers R20m. The erection of the statues is alleged to promote black unity in the province. However to the cost of whom?

The municipality believe that terrorists Nelson Mandela and Oliver Tambo will be “honored” in this way and will encourage to promote black unity.

Experts believe the amount of R20m for two further statues is excessive, and believes it is unfair to tax citizens while worshiping these terrorist worship.