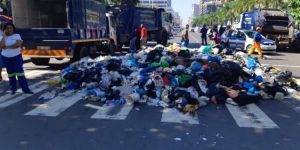 The municipal workers’ strike in eThekwini has created dire living conditions in Durban, and according to Nicole Graham, the city needs presidential relief.

The picture is not looking too pretty in the eThekwini municipality. After an unforgiving barrage of rain in April, operations in the city of Durban have been brought to a standstill yet again thanks to a strike of municipal workers.

It’s believed that tens of thousands of people were left without access to running water on the weekend, as locals continue their recovery from the devastating floods that battered KZN two weeks ago.

Why are workers striking in eThekwini
A failure to resolve a dispute over pay left crucial services unmanned and vital repairs simply weren’t taken care of. In fact, it has been reported by one DA member that valves around the city were “turned off” by employees on strike.

Last week, we saw protesters pile bags of rubbish up on the streets of Durban as part of their demonstrations. Given the unsanitary living conditions and lack of basic services, DA Councillor Nicole Graham is saying that “enough is enough”, and she isn’t taking the situation lightly.

eThekwini strike is now a “humanitarian” crisis
Graham has branded this crisis as a “humanitarian” one and issued a demand for Cyril Ramaphosa to come and visit the city as he did with angered residents of Alexandra in April.

“The DA reiterates our call for the Provincial and National Government to intervene in what is going on in eThekwini. It is clear eThekwini is unable to take back control themselves, and that this situation needs an urgent resolution.”

“President Cyril Ramaphosa, who was eager to rush to Alexandra in Johannesburg during strikes, hasn’t intervened at all. This is despite Durban being absolutely filthy and many people haven’t had water for more than five days – a clear humanitarian issue.” – Nicole Graham

Is Mayor Gumede to blame?
Local DA representatives in Durban have turned their frustrations towards Mayor Zandile Gumede. They’re blaming her for “cadre deployment” that has undermined how local government should function, and Graham claims that her political opponent has completely “lost control” of the situation.