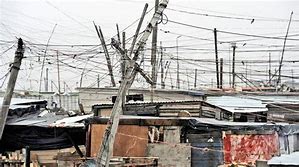 Eskom has awakened from its 25 years of corruption and has now suddenly decided to cut off Soweto’s illegal electricity consumers’ supply.

According to the latest report, Eskom has indicated that it will disconnect power from at least 60% of the 200,000 Soweto households with prepaid meters.

The reason is, according to Eskom, due to the fact that the majority of households have illegal connections, thereby stealing the power supply.

Experts say that’s one reason why regular payers have been so heavily burdened with unreasonably high rates for the past decade.

Eskom decided to take the action after the Supreme Court rejected Soweto residents’ request that Eskom be banned from cutting off power.

The media, and in particular Die Vryburger, have complained on behalf of thousands of power consumers over the past decade that Eskom allows black residential areas to steal power at the expense of honest payers.

Informed sources point out that the government has been aware for 25 years that its supporters steal electricity, and that Eskom allows it, while the police service has not moved a finger to apply law and order.