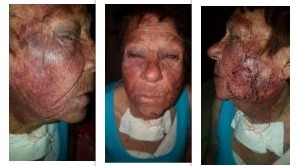 Warning: Photo’s not for sensitive readers: An elderly woman from Reddersburg in the South Free State are currently recuperating at close relatives in Bloemfontein after being cruelly attacked at the shop she managed for her daughter.

Erica Kleinhans, 51, tells her mother, Poppie Lennox, 78, was alone in her shop on Monday afternoon, “A young man” bought a packet of chips the third time. “He was also their on Saturday and came back on Monday at 08:00 and 12:00 every time to buy chips,” Kleinhans said, “but he is not a regular in town.”

When Lennox turned around to pick up a parcel from the shelf, the attacker jumped over the counter and gripped her blush, Kleinhans said. With that he saw she held her wallet against her chest.

“He strangled my mother, hit her so hard on her left shoulder that the shelf she had fallen against, broke and two beer bottles struck her on her head.”

The whole world was full of blood. It seems to me that she has passed out.

Kleinhans says her mother can not remember exactly what has happened. “The whole world was full of blood. It seems that she was passed out at one stage because when she came back, [her attacker] was gone. ” 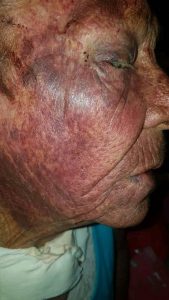 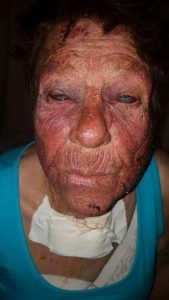 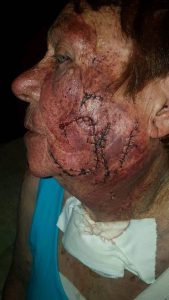 Lennox, who, according to her daughter, is still alive and refuses to sit still or to live in an old-age home, rose despite her injuries, switched on the outside light of the shop, closed the place and drove a short distance to a friend where the police and an ambulance was called.

After being admitted to a Bloemfontein hospital on Monday night, the doctors expected she would be discharged that night, but she stayed overnight and a cardiac scan was done on Tuesday morning after a brain drain was also performed to check for bleeding on the brain.

“Her blood pressure was terribly high,” said Kleinhans, “sure of the shock of the attack.”

Kleinhans contemplate that someone from her mother’s years “she is doing very well”. She says Lennox’s face looks better and even though her body stills feels sore and aches every day, a nursing sister assures them that the pain will begin to decrease within a day or so.

“Her face looks better on the side that was swollen, but on the other side where the glass has cut her, the wound seems to make an abscess,” says Lennox. “The sister at the Rosepark wound clinic where we were Thursday morning said we should come back if it does not get any better.”

Lennox’s left shoulder where the attacker hit her still “incredibly hurt”, but the swelling around her eyes is completely gone after it was swollen on Monday.

I will not take her back. I’m going to empty that store tomorrow.

Asked if her mother would go back to the shop, Kleinhans said, “I will not take her back. I’m going to empty that store tomorrow. She will from now on stay with daughter in the house on the plot where I live in an apartment. ”

But Kleinhans does not believe her mother will suddenly want to sit still. “We will see what we are going to do with her. She still wants to work; maybe she could help my son in his candy store here in Bloemfontein. ”

She had taken her mother back to Reddersburg, about 50 km south of the Free State capital, to file a complaint with the local police.

Lennox’s other daughter, Elize Wincento, lives in Pretoria, and her only son, Johan, is also in Bloemfontein.

Rescuers and people from far and wide expressed their shock in the social media about the cruel attack on Lennox. Maria Oneale writes: “My heart is broken.” She describes Lennox as “human-loving” and “precious”.

The Free State police on Thursday asked for a statement about the attack.