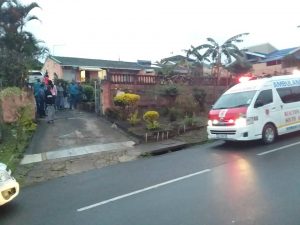 An 82 year old man was bludgeoned to death and his 77 year wife was seriously injured after she was beaten and stabbed during a house robbery at their home on Flame Road in Chemsford Heights – Tongaat a short while ago (Saturday).

At approximately 17:12 Reaction Unit South Africa’s Tongaat Operations Centre received a call from a frantic female requesting assistance at her neighbors home. The caller explained that medical assistance was also required for an elderly couple who were assaulted during a robbery.

Reaction Officers and Medics were dispatched to the residence and upon arrival found the elderly male victim lying on the floor in one of the bedrooms. His arms were tied behind his back. He was fatally injured and died at the scene after he was repeatedly assaulted with a pipe or knobkierie on his head.

His 77 year old wife was seriously injured in the attack. She sustained multiple lacerations to her hands, an injury to her head and a ruptured eye. She was treated on scene before being transported to hospital by ambulance.

It is alleged that the male victim had woken from his afternoon nap. When he entered his living room he noticed a female standing at his front gate. He allegedly opened the gate to see what she needed when he was accosted by two men who were armed with knives and a knobkierie. The suspects began assaulting him when he screamed for help.

His wife who was asleep at the time awoke when she heard her husband screaming for help. She went to his aid and was also assaulted by the two men who tied up the elderly couple and forced them into one of the bedrooms. The suspects then ransacked the home and stole an undisclosed amount of cash and jewellery before they fled. According to the 77 year old the female that was at their front gate did not enter the home during the robbery.

The female victim managed to remove her restraints and called out for help. Neighbors who heard her screams went to the home to investigate and found her bleeding from her injuries. They then contacted RUSA for assistance.