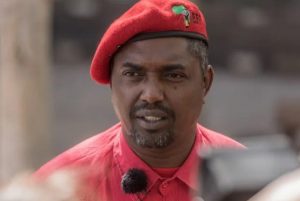 This after he and EFF second-in-command Floyd Shivambu were offended by a comment Buchan made about only Afrikaans and Jewish people having a “covenant” with God.

Buchan recently announced that he would be holding an event at the stadium on February 1, 2020, called Staan Op Vir Jesus. While all would be welcome at the event, Buchan explained that “this time the emphasis will be on the Afrikaner nation”.

“We are calling out to God, remembering only two nations have ever been in covenant with the God of Abraham, Isaac and Jacob. They are the Jewish people and the Afrikaans people, that is a fact,” he said.

An unimpressed Shivambu tweeted: “A racist Boer Pastor Angus Buchan says it’s only the Boers [and] Jews who have a covenant with God, [and] he’s convening a predominantly Boers meeting in Loftus Rugby Stadium in February 2020. You can wish whatever you want Afrika [sic], but these people don’t want us.”

Gardee then responded to this by saying the stadium “needs” to be booby-trapped with “limpet mines” prior to the event.

Limpet mines are usually used in the navy, but were also used by uMkhonto we Sizwe, the military wing of the African National Congress (ANC) under apartheid.

Gardee also described Buchan as a “Boer religious fanatic” who he accuses of “misrepresenting the Jewish nation” and called for him to be “banned from our TV screens”.

AfriForum deputy CEO Ernst Roets called for Gardee to be “prosecuted” for the tweet.

“This is not only hate speech, it’s incitement to violence. Godrich should be prosecuted,” he said in a tweet of his own.

“Having stated that the Jews and the Afrikaans peoples were the only two Nations that had a covenant with God is totally wrong and for that statement, I humbly ask your forgiveness,” he said.

Gardee was soon back on Twitter to indicate he didn’t accept the apology.

“This is what we are subjected to… stir up racial disharmony and apologise when taken to task… the fact is that the man sees Africans in their own country and continent as subhuman and not worthy of God…” he tweeted.