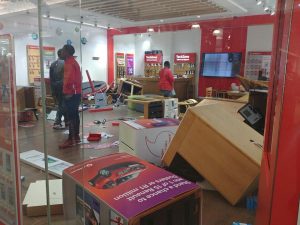 EFF supporters have vandalized all the Vodacom stores at the Mall of the North in Polokwane. They are protesting against an image of Julius Malema and Floyd Shivambu captioned “abusers of democracy”, shown at the Vodacom Journalist of the Year Awards.

It seems the inconvenient truth hurts. Ironically, these acts of destruction just confirms the same narrative.

Incidentally, the SAPS just stands by and “observe” the chaos. No arrests have been made yet and we foresee that none will ever happen.

This report does not necessarily reflect the opinion of SA- news.