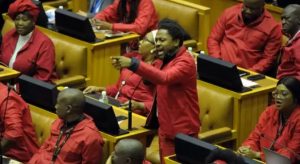 Economic Freedom Fighters member of Parliament (MP) Mbuyiseni Ndlozi on Tuesday reiterated his scorn of the Springbok rugby team and said there would be no racial unity in South Africa until wealth was shared equally and land returned to those from whom it was taken.

Ndlozi, in a debate on a motion to congratulate the Springboks for winning the Rugby World Cup, said calls to rally behind the team was a form of collective abuse of black people, who were being asked to sanctify a sport and a symbol that remained redolent of white supremacy.

“Because the Springbok is a sign that cannot be whitewashed, it stands in parallel continuity with Die Stem entrenching white supremacy in our society. That is why the rugby team in question is white-dominated. It is a perfect reflection that white people have successfully resisted change in our society for 25 years,” he said.

He said the mass street celebrations that have met the returning rugby champions were “fake” because it asked black people to buy into a false notion of transformation.

“Out there, people say what is happening is racial unity on the streets, but the truth is out there is (sic) scores of black people extending their exploited, marginalised, scandalised and brutalised humanity to a white-dominated team…. the white community to this day has not recognised the humanity of black people.”
Related Articles

Ndlozi said Springbok captain Siya Kolisi had to go to a white school — he attended Grey High School in Port Elizabeth — to win acceptance and dismissed the narrative that wing Makazole Mapimpi was a rare case of an Eastern Cape player who had to overcome adversity to achieve success on the field.

There are more black rugby players in that province than there are white people in South Africa, he said.

Ndlozi also referred to the hate speech case against Springbok lock Eben Etzebeth, who stands accused of hurling racial abuse at a group of people in Langebaan, on the West Coast.

“Why must we rally behind people who when they are together call us baboons?” he said.

“We, therefore, call on black people to reject the racial abuse that the [African National Congress] ANC government is subjecting us to. It is a collective emotional abuse. This parade is a complete abuse of our people.

“No racial equality until the land comes back, no racial unity until [there is] equality and black people are paid the same as white people.”

Ndlozi caused an outcry when shortly after the World Cup final in Japan he tweeted that he was congratulating Kolisi but that the other members of the Springbok team should collect their congratulations from England’s Prince Harry, who visited the team in their locker room after the match.

President Cyril Ramaphosa has saluted the team as an inspiring example of the potential South Africans could reach if they worked together across racial lines.