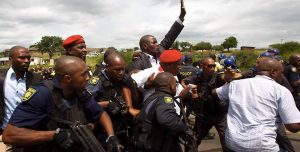 EFF students attacked Malema’s car with stones and his bodyguards had to open fire on them to protect their red leprechaun leader.

The bodyguards of EFF leader Julius Malema allegedly fired live rounds at party members who threw bottles at his car when he was leaving a party conference on Saturday in Gauteng.

The party’s student leader at the University of Johannesburg’s Soweto campus Mphahlele Phasoane Mpho alleged this on Sunday.

Mpho said he and others were outside the venue in Midvaal‚ listening to Malema’s speech via Facebook Live.

Mpho said after the speech‚ Malema and his bodyguards got into a car. When they were leaving‚ some delegates started heckling Malema‚ calling him a sell-out. Malema’s car moved forward and made a U-turn.

“The security from the car comes out together with the CIC (commander-in-chief Malema). Then they beat people up‚” Mpho said.

There was a gunshot and the crowd dispersed.

“They started beating us up. We started running away‚ but one thing that we saw is that they took another cadre. They took that person and went away with him to the venue entrance. Then as we dispersed in different directions‚ they started shooting at us. There were gunshots all over the place.”
When party members returned after dispersing‚ they checked up on the person that was allegedly beaten up.

“This cadre was unconscious… The only thing you could see from that man was blood. That man was taken to a hospital.”

Mpho wrote in a Facebook post that was later deleted: “When Hitler fell during his times‚ it was because of dictatorship. Tonight we survived. We dodged bullets from Malema’s Military.” (sic)

EFF spokesperson Mbuyiseni Ndlozi was contacted for comment but has not yet responded.