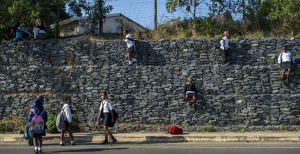 This is despite research showing that there are many factors that contribute to bullying and gangsterism in schools.

Matsemela was speaking at a roadshow attended by principals and school governing bodies at the Vaal Reefs Technical High School, in Orkney, last month. In a statement released afterwards, the department recorded her as saying that: “Bullying and gangsterism is necessitated by overaged learners in schools”.

She went on to say: “We should not allow over aged learners to attend school with young learners. Children will be admitted to school according to their age. School governing bodies should be responsible in monitoring the admission policy of their schools. They should regularise admission of learners in schools.”

She added that admission of over aged learners would take place on exceptional cases only.

Stacey Jacobs, a researcher at non-governmental group Equal Education, told the Mail & Guardian that putting the blame squarely on overaged learners for violence in schools was simplifying the challenge.

Violence in schools has been in the spotlight in recent years with learners doing things like attacking each other and assaulting teachers. This has, in some cases, even lead to deaths.

Last week, the Gauteng department of education revealed that since the start of the year there have already been 187 cases of bullying and 107 of violence and assault in the province’s schools.

In the North West province, a Grade 10 learner stabbed a 24-year-old teacher to death at a school in Zeerust last year. The 17-year-old was sentenced to a decade behind bars in March.

The provincial department of education, at the time, said the incident had “created a lot of anxiety and uncertainty among educators and learners”. This led to the department hosting a provincial school safety summit in March to address school safety challenges in the province.

Among other things, the summit resolved on: providing security guards in schools on an incremental basis, starting with 200 schools; implementing a learner code of conduct addressing social ills; and ensuring that codes of conduct foster good behavior and deter ill-discipline in schools.

None of the resolutions included not admitting overaged learners in schools.

Elias Malindi, the spokesperson for the provincial education department, told the M&G that Matsemela made the statement because of her observations of incidents of school violence that involved old learners.

Malindi referred to two incidents that he said led to Matsemela making the remarks — one of them was that of a 17-year-old who stabbed a Grade 1 pupil to death at Dikeledi Makapan Primary School last year.

Reports surrounding about that incident, at the time, mentioned nothing about school bullying or gangsterism. Elijah Mhlanga, the spokesperson for the national basic education department, told the media at the time that the 17-year-old learner was in a romantic relationship with the older sister of the Grade 1 pupil. The couple allegedly had a fallout which led to the 17-year-old sleeping in the toilets of the primary school. When the Grade 1 pupil went to the toilet, he stabbed him multiple times until he died.

Malindi said another incident was that of a 14-year-old learner who kicked a nine year old learner down the stairs at school and the injuries led to the nine-year-old dying in hospital.

While citing these two incidents, Malindi did not go on and respond to other detailed questions sent by the M&G, these included a question on whether schools had been directed not to admit overaged learners. It is therefore unclear whether or not this was a policy change, or a remark made without a plan behind it.

The compulsory school age is seven to 15. And according to the national admission policy for ordinary public schools no education department must “unfairly discriminate… against an applicant for admission”.

The policy only speaks of a learner who is 16 or older who is seeking admission for the first time at a public schools who should be advised to enroll at an Adult Basic Education and Training centre.

Equal Education’s Jacobs said it was understandable that big age gaps between learners in one classroom could give rise to possible complicated dynamics that can create challenges in teachers enforcing discipline.

“But to blame learners for all the violence in schools is actually very unfair. I also think that the fact that there are so many older learners in schools it’s a reflection of the failures in the system,” she said.

“Age is also not the only determinant of bullying or gangsterism, we see so many other factors that need to be taken into account with regards to school violence.”

A 2012 study titled ‘National School Violence Study by Centre for Justice and Crime Prevention’ found that violence in schools cannot be attributed to a single factor.

The study noted that: “It is becoming widely recognised that no one factor contributes to violence perpetrated against or by learners. Violence occurring within schools has many antecedent factors that stem from the different social settings within which young people operate, including the school environment, the family and the broader community in which young people live.”

Jacobs said there needs to be coordinated efforts across departments to address violence in schools and that removing over aged learners in classrooms would not solve anything.