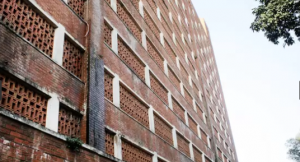 Durban – Durban police officers say they are living like sewage rats while they are expected to be dignified officers and lead by example.

Residential flats meant for police members are in a shocking state and government departments shift the blame and responsibility on to each other.

An officer who called the Independent on Saturday said many of the flats did not have working water and electricity, and that criminals had moved in to some of the flats.

“This is our disgusting daily lives,” said a SAPS Warrant Officer, who asked not to be named, a resident of Excelsior Court building on Ridge Road.

“We are expected to be dignified officers and lead by example, but we live like sewage rats. There is no water or electricity in some of these flats. We use the water from the fire extinguisher pipes to cook and to do all the household activities,” he said.

The officer said not having water and electricity was nothing compared with the fact that they also lived with people who are not SAPS members and crime in the building was overwhelming, even though it was meant to be a police residence.

In January 2008, the Independent on Saturday published a story about police buildings in which residents said the flats were the breeding ground of criminals and thugs, and occupied by people who are not police officers. More than 10 years on, it had not improved, according to the police officer who spoke to us.

The stink of sewage is evident from the entrance of the building. Passage lights are barely hanging from cracked and peeling ceilings. Water drips from fire extinguisher pipes from upper-floor flats. Some of this water smells of urine.

Trees grow on the walls, cracking the building piece by piece.

“There is no security whatsoever, people go in and out as they please.

“We are not safe at all. We always try to keep our heads down so we don’t get in anyone’s way, especially those who live in the building.

“We see suspicious things happening in this building, but knowing that this is where we live and sleep unguarded, we find ourselves in no position to do anything about it because there is just a door between our lives and the gun of a drug dealer or thief.”

The underground parking, he said, was where most criminal activities happened. Some of the garages held apparently stolen and partly stripped cars. He did not know who owned the cars.

Rubbish was strewn all over the place.

“There is no waste control system whatsoever. People throw their waste anywhere and some dump it at these garages. It is not just waste: we sometimes find wallets and handbags in a state that you can tell that criminals rob people and come here to search the bags and dump them here.

“I once asked questions of people who have been here longer than me, and they said the municipality was supposed to collect waste or clean around this building regularly but that happens once or twice a year. I wanted to know more about the issue with the building and the conditions we are living in, but I was advised to keep my head down by those who have been here longer,” said the officer.

He also said some SAPS members moved out of the building and rented their flats to non-SAPS members.

Questions from the Independent on Saturday were directed back and forth between provincial SAPS and national and provincial Public Works Department.

Eventually, SAPS spokesperson Thembeka Mbhele said all police personnel occupying these buildings no longer had the legitimate right to live in these quarters because some members were retired, had resigned or been dismissed; others had outstayed their occupation period in accordance with the housing policy and refused to move out. Others had taken possession without the proper authorisation.

“This building is not in a suitable condition for human occupation and is a danger to every person in occupation. The state is under no obligation to provide them with housing and the onus of provision of housing remains the responsibility of each member. With respect to the erratic delivery of water, this is owing to illegal connections by some members themselves. In order to ensure the safety of members, SAPS is endeavouring to vacate them,” said Mbhele.

Nthabeleng Molefe, the provincial secretary of the Police and Prisons Civil Rights Union said over the past 10 years they had not received any communication from the SAPS department regarding four buildings, three in Durban and one in Pietermaritzburg, that had the same problems. She said their last request was that the SAPS come up with alternative accommodation.

“We still receive complaints regularly, but the matter is that the departments involved have not come up with the alternative accommodation. Our members that reside in these buildings have been there for a very long time and they have their families there. They cannot evict people with children without an alternative,” said Molefe.

She said SAPS must consult with Public Works regarding state accommodation.

The Independent on Saturday