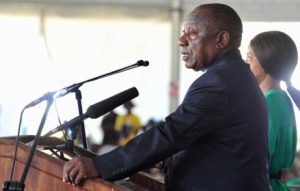 President Cyril Ramaphosa says the energy crisis currently faced by the country will soon come to an end.

South Africans have expressed frustration, as Eskom battles to keep the lights on with stage 4 load shedding currently in place and was expected to last until 11pm.

Ramaphosa, speaking in Sharpeville on Thursday in his Human Rights Day speech, said he put measures in place to ensure that the country comes out of the dark.

The country has suffered from some of the worst power cuts in several years and a major challenge for Ramaphosa two months before an election at which he will try to reverse a decline in voter support for the African National Congress.

“If the current intensity of load-shedding were to persist in 2019, it could subtract up to 0.9 percentage points from annual growth,” Goldman analysts wrote in a note to clients.

Eskom supplies more than 90% of the power in South Africa but has suffered repeated faults at its coal-fired power stations, along with low water levels at hydroelectric plants and diesel shortages.