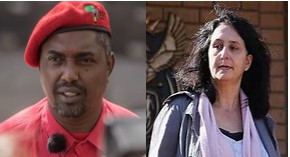 Let’s spread as widely as possible and demand the arrest of the terrorist !!

It is clear that the legal system does not protect our whites. Poor Vicky Momberg is hunted like an animal for the K-word and was arrested again today for failing to comply with her parole conditions.

The EFF’s Secretary General Godrich Gardee, following Angus Buchan’s statement, said that only two peoples. the Jews and the Afrikaner people who made a covenant with God responded as follows:

“That stage needs some limpet mines bobytrapped arround it prior to that date…. & Let’s see what happens to the only people who have a covenant with God…. & I know this peasant religious fanatic is misrepresenting the Jewish nation… .he must be banned from our TV screens ”

If any white man made a similar threat, he was immediately arrested for terrorism.
How is it possible that the terrorist has not yet been charged?

How is it possible that a scathing word has more value than the propaganda of murder of the whites of the country? This is the most attack and propagation of murder on us but are the terrorists still free?

The Patriot for Minorities demands that the terrorist be arrested immediately for hate speech and for terrorism.

By the way, Ernst Roets, Godrich Gardee commits an act of terrorism and hate speech. Threatening people to blow them up is much more than propagating violence.

Notice Vicky Momberg is in jail for saying the K-word while people who claim our blood is free, does that sound right?

Everyone criticizes Johan de Jongh for shouting at the All Blacks but the people who threaten to blow us up with explosives are okay?