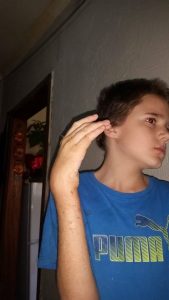 As we have sadly come to expect from state hospitals nowadays, a mother and son from Nelspruit, Annelise de Beer and her son Nathan, had a nightmare experience at their local state hospital in Nelspruit, which caused the unfortunate 11 year old boy a lot of pain.

He broke his wrist at school in September and after hours of waiting in the queue at the hospital, a doctor finally put a splint in under anesthesia, but after the boy woke up another doctor said the hand is still not straight and the splint procedure had to be repeated.

He received anesthesia again but the anesthesia did not kick in and the boy had tremendous pain. After 2 weeks they went back to the hospital and a doctor again said the splint procedure must be redone and again there was no anesthesia.

The boy had tremendous pain yet again and the mother was so shocked that she herself passed out. After 3 weeks they went back to the hospital because the pain had continued and there was swelling. The doctor said the hand had healed and they went home.

Nathan then said he will just walk with the sore hand, rather than to go  back to hospital. Luckily a friend launched a campaign on Facebook to get funds for private medical care and a surgeon also performed an operation free of charge earlier this month .

The surgeon had to saw through the bone because it started to grow on skew. Funds left over  will be used to help other children.                     Nathan is now recuperating well. Because of the pain he suffered, he missed 30 days of school and he will have to repeat his grade 4 school year next year.